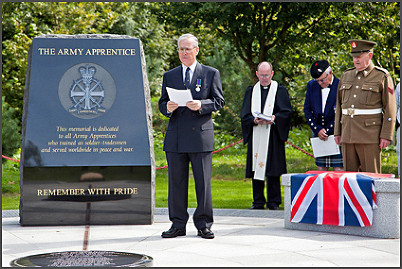 On Sunday, 9th September 2012 – at 12.00 noon a joint Dedication ceremony was held by the AANM Trustees for the four Ex-Apprentice Associations’ of Chepstow, Arborfield, Harrogate and Carlisle

It was attended by representatives of all four Associations and up to 150 ex-apprentices including families & friends.

The Vice Chairman of the AANM Trustees Keith Thrower opened the proceedings with a welcome address.

The Rev Garry Kelly then proceeded to dedicate and bless the new Standard of Hadrians Old Boys Association, carried by Malcolm Davison. This was followed by a “Verse for the Occasion – Legacy” penned and read by Tony Church. The final Commemorative Tablets were dedicated and the new Lecturn was unveiled by the Memorial Patron, Major General G B Berragan CB. The Rolls of Honour were then placed at the front step of the memorial by each Association representative, one at a time (Arborfield-by Mo Hope, Carlisle-by Ted Cooper, Chepstow-by Colin Weir, and Harrogate-by Johnny McGahan). Mo Hope received the Rolls into the their final resting place, the casket to be sealed by the Stonemason Keith Rackham of Perfitts. AANM Trustee and Secretary Gordon Bonner was the “anchor” for the event and Trustee & AOBA Representative Mo Hope compiled the Order of Service and choreography, as he did for the main Dedication held last year.

The Patron placed a weath into the casket followed by the Blessing and Act of Remembrance and sounding of the Last Post by the RM Bugle Major, two minutes silence and then Reveille.

The Patron then made a short Address and the Vice Chairman closed the Proceedings.

An informal evening dinner was held on the Saturday prior to the event, at the Menzies Hotel, Littleover, Derby and enjoyed by all who decided to stop over the night before. It also allowed the 49ers of Arborfield to join together for a mini reunion. Colin Weir provided the light entertainment. The excellent hotel facilities were a bonus.